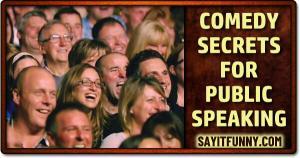 Well, for the record I am going to start out by saying what I have said for years which is this:

When it comes to generating laughter from the spoken word, there is NO difference between what happens in a casual conversation, during a speech or presentation or when delivering a stand-up comedy routine.

In other words, the mechanisms for generating laughter from verbal communication are EXACTLY the same regardless of the environment that the laughter is being generated in.

As a matter of fact, when it comes to the differences between laughter generated during a really funny speech and a headliner level stand-up comedy routine, the primary difference can be described in just two words: punchline frequency.

So here’s what I want to accomplish in this article:

So, lets get started with the videos…

Videos For Your Review

Below you will find two videos for your review, each around 3 minutes each.

One of the videos is Jeanne Robertson, an accomplished public speaker and James Gregory, well established headliner level stand-up comedian who bills himself as The Funniest Man In America.

After you have reviewed both videos, my comparative analysis follows:

Let’s start with the similarities…

Both Robertson and Gregory are about the same age (she’s 2 years older). Both are influenced in their speaking by a Southern upbringing.

Both have a similar presentation style that is not remarkably animated but is influenced significantly by facial expressions and voice tone and inflection qualities.

In these videos, both are focused on a single topic in the content delivered; Robertson’s talking about a particular experience on an airline while Gregory is talking about an uncle who is not very bright.

There is no old school, one-liner or two-liner “joke” action — jumping from one topic to another unrelated topic — used to generate the laugher that is apparent in either of these video segments.

In these videos, both are delivering a routine — by that I mean that for both, this was NOT the first time this material was delivered; it had been delivered delivered many times to different audiences before it was replaced with new material.

Now for the differences…

There is a very small amount of profanity in Gregory’s routine, while there is none used in Robertson’s presentation. Outside of that…

The primary difference that I can see easily is that Gregory’s material is a bit tighter than Robertson’s material.

What does “tight mean? In stand-up comedy, tight refers specifically to the punchline frequency and subsequent laughter generated by the material being delivered. Headliner comedians at Gregory’s level will routinely generate an average of 4-6+ laughs each performing minute.

In the Gregory video above, if you know what you are looking for, you will see that minor audience laughs are actually being generated on set-up lines (informational lines not intended to generate laughs) because the punchline frequency is at such a high level that it is rhythmic.

That means that the audience can fall into a laughter rhythm and will tend to laugh in an automatic way to that rhythm, even for lines that are not intended to generate a laugh at all.

Such is the magic of having a very high punchline frequency rate which is common in well developed stand-up comedy material..

Most so-called stand-up comedy “experts” can’t even begin to discuss this because they can’t get past trying to use the definitions of “set-up” and “punchline” as their primary educational information.

But Gregory’s material also had a number of smaller laughs generated by the “rhythmic tightness” of his material that I discussed above that I did not count in this comparative analysis.

So you tell me — outside punchline frequency, what are the significant differences in the content delivered by Robertson and Gregory?

I submit to you that there are NO SIGNIFICANT DIFFERENCES. Not only that…

I can tell you beyond a shadow of a doubt that Robertson’s material could be EASILY tightened to generate more more laughs with editing and the addition of punchlines.

But it really doesn’t need to to be tightened at all — want to know why?

The laughter expectations of an audience reviewing a speaker are FAR LESS than that of stand-up comedy audience.

In the case of Robertson, SHE FAR SURPASSES what most speakers can deliver in the way of audience laughter.

Neither Robertson or Gregory have any connection to what I offer in the way of comedy education — but they certainly exemplify what I teach.

Some of the reasons that my online course for comedians is popular in public speaking circles is because:

Like I said at the beginning of this article:

When it comes to generating laughter from the spoken word, there is NO difference between what happens in a casual conversation, during a speech or presentation or when delivering a stand-up comedy routine.

The real key to it all when it comes to laughter success in public speaking or stand-up comedy is to know how to use the natural comedy talent that a person has in the same way they use it in casual conversations without thinking about it.

And as far as difficultly and diversity of comedy material that can be used, public speaking has some advantages over stand-up comedy:

sayitfunny.com
Humorous Public Speaking Vs. Stand-up Comedy
There are some major advantages when it comes to humorous public speaking versus delivering a stand-up comedy routine. This article reveals those advantages.