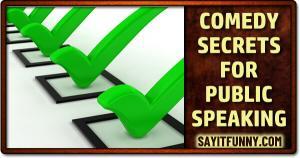 From the perspective of generating audience laughter, public speaking professionals have significant advantages over stand-up comedians.

In this article I’m going to explore those advantages keeping this in mind:

As I discussed in my article “The First Secret For Adding Humor To Speeches And Presentations”, the mechanisms for generating laughter are exactly the same whether a person is engaged in a casual conversation with friends, delivering a stand-up routine, teaching a class or giving a motivational speech.

So if the mechanisms for generating laughter are the same, how does public speaking have advantages over stand-up comedy?

Public speaking has no such laughter generation requirement or expectation.

However I can tell you that any presenter who can generate 30-45 seconds or more of laughter for every 5 minutes of their presentation is on fire and tends to be wildly appreciated by the audiences they are presenting to.

Comedians, teachers, trainers, instructors and presenters can all be grouped into the category of public speakers. Comedians are simply engaged in highly specialized public speaking with a focus on entertaining audiences with laughter.

The big difference between what comedians do versus any other type of public speaking is that they don’t have “required” content to deliver or content that is strictly informational and not intended (or desired) to be funny.

Don’t get me wrong – speeches and presentations can generate stand-up comedy laughter levels from beginning to end depending on the subject matter or topic being addressed and the skill of the presenter.

But there is no requirement or expectation for any presenter to generate stand-up comedy laughter levels – it’s just a real thrill for the audience when it happens.

When it comes to laughter generation, far less laughter is needed to be an absolute hero to the audience as a public speaking professional.

Note: I developed a large portion of my initial stand-up comedy material teaching traffic school in San Diego, California in the mid 90’s. It was marketed as “comedy traffic school”.

So when I tell you that generating laughter is the exactly same no matter what environment you are generating it in – that’s not just some concept that I made up. I have experienced this first hand, over and over again over YEARS.

When it comes to the variety of comedy material that can be used to generate audience laughter, public speaking has HUGE advantages in this area.

So let me talk about the three types of comedy material that can be used to generate audience laughter – original, open source and credited.

Original comedy material is simply that which reflects a person’s sense of humor, their point of view on anything in life and the unique way they express these things.

Topics of discussion or any type of subject matter are not “original” in and of themselves. You will note that many comedians talk about the same sorts of things:

What does make comedy material about anything “original” is the person’s own personal experience or viewpoint, the details that they provide about it and the way they express what it is that they have to say about it.

Comedians tend to be largely restricted to this sort of comedy material unless they work outside the comedy club market.

However in public speaking, this is simply one type of comedy material that can be used.

Open source comedy material involves for which there is no claim for originality or ownership.

Street jokes (stand-up comedy term for jokes told on the street) are a perfect example of open source comedy material. Here is an example:

A woman was walking down the street with a baby ape in her arms when a friend stopped her and asked what she was doing with the ape.

“I just bought this ape as a pet. We have no children, so he’s going to live with us – just like one of the family. He’ll eat at the same table with us. He’ll even sleep in the same bed with my husband and me.”

“But what about the smell?” the friend asked.

“Oh, the ape will just have to get used to him like I did.”

Note: I have seen pro comedians use street jokes in their act but 1) it is rare 2) it tends to be edited for brevity and/or punchlines are added if it is long.

But as a general rule, unless a comedian is working outside the comedy club scene, this sort of open source joke tends to be unacceptable.

For public speaking however, this sort of joke is 100% acceptable provided it is funny and appropriate for the audience.

Open source comedy material also includes funny quotes, quips, rhymes, funny statements from those who are long dead (hence credit for the source of the material is optional) and can all be used without issue by the public speaking professional.

Credited comedy material is simply using another persons comedy material and giving them credit for it when you use it. A perfect example is using a quote from a comedian’s act.

Again, using another comedian’s material – even credited – would be largely frowned upon in the comedy club market (unless it was a single line or two to set-up original comedy material).

But in the public speaking world, no such restrictions apply.

Note: The only exception to this would be if the person (celebrity, personality, politician, etc.,) whose quote you were using was in the audience and asked that you not use their quote. This rarely happens.

A stand-up comedy audience expects to laugh loudly and frequently.

No such expectation exists in public speaking. As a matter of fact, the expectations are usually the exact opposite, meaning that…

Audiences who are in attendance tend to be shocked if a speech or presentation is entertaining or generates laughs. Experience for most everyone seems to portend boredom and suffering as opposed to expecting to be entertained to any degree.

Audience appreciated is amplified once they realize that they aren’t going to have to suffer though a boring, lifeless lecture.

In stand-up comedy, audience appreciation can quickly evaporate and actually degrade to the level of contempt when a comedian fails to meet their expectations for laughter (like generating none) and/or is rude or offensive in the process.

Here are the main points in this article that I want to highlight:

1. There are more comedy material options available to those involved in public speaking than their are in stand-up comedy (specifically in the comedy club market which is most known – not so outside that market).

2. The public speaking pro has no requirement or audience expectation to generate the same laughter frequency as a comedian. Only a fraction of the laughter levels a pro comedian generates is required to be regarded as an entertaining and noteworthy presenter.

Note: The higher the frequency of laughter a public speaking professional can attain, the higher up they are in the world of public speaking with increased demand, audience attendance, and compensation.

3. Provided they really know what they are doing, it is far easier to exceed audience expectations as a presenter than as a comedian when it comes to laughter generation.

As long as a presenter actually has some baseline comedy talent (which most people have more than enough), learning and applying the strategies and tactics for generating audience laugher is an easy affair.

The hard part (just like with comedians) is overcoming the plethora of preconceived ideas, misaligned assumptions and misinformation that is not only prevalent, but severely limits a presenter’s ability to use their natural comedy talent on demand to get the laughs they want.