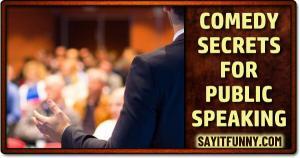 I found an interesting article that wasn’t too keen on using “canned” jokes to begin a speech or presentation by The Buckley School called:

This article strongly discourages folks from using “canned” jokes at the beginning of a speech or presentation and attempts to provide justification for this position on the matter.

My position on the matter is completely the opposite and based on first hand experience using street jokes (stand-up comedy term for canned jokes) for both corporate stand-up gigs and paid speech work with great success – FOR YEARS.

However, my recommendation for using street jokes in public speaking comes with some very specific caveats which I discuss below.

So let’s take a look at what that author had to say and I will provide my input as we move along.

Here’s the beginning of the article:

“I was thinking I’ll start with a joke.”

We meet a lot of people who either a) are convinced this is a great idea or b) believe they should start with a joke because “that’s what people do.”

Every once in a while, we even encounter a speaker who pulls it off.

But we discourage speakers from using canned jokes in their opens (or elsewhere) in speeches. Here’s why.

Then there is an image with the beginning of a street joke (2 nuns, a penguin, a man with a parrot on his shoulder and a giraffe walk into a bar).

The article goes on to cover 3 points on why opening a presentation with a joke is a bad idea.

Before I get those points, here’s what I can tell you about opening a speech or presentation with a joke:

I would NEVER advocate starting any speech with a “canned” joke UNLESS the joke has been carefully selected, edited for brevity and being verbalized (instead of being read) and has been sufficiently rehearsed in advance to ensure a flawless delivery.

If the joke is not a real situation based type of joke that could actually be interpreted as a personal experience (like one involving talking animals, farmers and daughters, people or animals walking into a bar like the author used in the image at the beginning of their article)…

Then transition lines need to be used in order to set-up the joke FIRST before it is delivered.

Note: Every joke has some sort of overall broad theme associated with it – a communication misfire, revealing an untold truth, jumping to the wrong conclusion, misinterpretation of an event or experience, etc.

Ideally, the joke selected as an opener has a theme that correlates with at least some of the content of the presentation, which is then given purpose for being told with a couple of transition lines before being delivered.

Unlike original comedy material which works the best in situations with an audience, street jokes can work very well in a one-on-one type of conversational scenario to see if if generates a laughter response.

If a person is unwilling or unable to do these things beforehand, then I would have to side with the overall premise of this article that opening a presentation with a canned joke (street joke) is a bad idea.

With that said, let’s move to the first reason why this author thinks starting a presentation with a joke is a bad idea.

Here’s what the author provides as the very first reason for avoiding opening a speech with a canned joke or a canned story:

1. If you’ve heard it before, at least some of your audience probably has too.

This is probably the lamest way possible to start this argument.

Unfortunately for this author, the article in question was found by ME, who has considerable experience and expertise in this area, specifically…

During my years as an actively performing comedian, speaker and instructor I had about a dozen very carefully selected and professionally edited street jokes that I could use at any time.

There was one particular street joke that I used for almost all of the corporate comedy gigs that I performed at and that I also used on occasion in select stand-up comedy venue environments.

I got the same huge laughter reaction virtually every single time that I delivered that joke.

There is a group dynamic in play that affects laughter response when delivering jokes or other funny material to an audience. That means that…

It doesn’t matter at all if some of the people in the audience have heard the joke.

What matters is that the joke was carefully selected, professionally edited and flawlessly delivered. When that happens…

I have personally witnessed other headline level comedians skillfully incorporate personalized and enhanced street jokes into their act (which they repeat over and over again to different audiences) and get uproarious laughter as a result.

With that said, let’s move to the next bogus claim this author has to offer…

The next reason by this author for not using a joke to start a speech of presentation with is this:

2. You’re probably not a comedian—nor do you want to be.

“Never begin a speech with a joke. Not even if it’s funny. Nothing betrays the amateur faster,” writes Reid Buckley in Strictly Speaking.

I don’t know who Reid Buckley is, nor have I read his book, but…

This kind of ill informed comment tends to remind me of a time back in the 50s and 60’s when tobacco companies hired medical doctors to do research to determine and exemplify the health benefits from smoking for marketing purposes.

So this “never begin a speech with a joke” comment is simply blatant propaganda or an episode of uncontrolled ignorance.

The notion that this is a requirement in order to be able to deliver a great joke at the beginning of speech or presentation is actually offensive to me, suggesting that the audience reading this drivel tend not to have the IQ of a shoe string.

There are literally hordes of speaking professionals who can entertain audiences at the highest levels who have NEVER been a comedian, nor did they have the desire (or need) to do that.

But the inference here that you need to be a comedian to deliver a simple street joke at the beginning of a speech is ludicrous at best.

Now, the author does go on to say that they urge speakers to use humor in their presentations, but a canned joke…

Directly from the article:

But a canned joke to open:

If a person is unwilling or unable to carefully select, skillfully edit and rehearse a street to open a presentation with, then they shouldn’t do it.

Important: It is a formula for disaster to attempt any type of humor in public speaking unless you really know what you are doing.

But the important thing to know is this:

You DO NOT need to become a comedian in order to entertain audiences and get big laughs during a speech or presentation.

Here’s a related article on this blog:

sayitfunny.com
Giving Funny Speeches Without Being A Comedian
If you are looking for tips on how to give a funny speech without becoming a comedian, this article has some killer tips that you don’t want to miss!

Now for the last reason provided by this author…

I actually agree with this statement overall:

3. There are better ways to add humor.

Yes, there are certainly effective ways to add original humor to speeches and presentations.

They are simply another “arrow in the quiver” of tactics a person can use to entertain an audience and generate laughs.

Street jokes have some very appealing characteristics such as:

I am certainly not suggesting canned jokes are the “end all, be all”  when it comes to opening a presentation or at any time during a speech.

But what I am absolutely suggesting is that they have been given a bad rap in the article that I reviewed by someone who is attempting to operate well beyond their level of competence on the matter.

Just download a free copy of The Peter Principle By Lawrence J Peter for details on exactly what I am referring to (just do a search).

I am not a “joke” guy. I have never been a joke guy. I am not one of those fools who can remember and recite 1000 bad jokes without even breathing.

It wasn’t until I became a comedian that I discovered how to select, edit and rehearse street jokes for use when standing in front of audiences.

And I can tell you now – again – that a person DOES NOT need to become a comedian to do what I am talking about.

But they do need some knowledge that is usually not available to speaking professionals – very easy to understand and apply techniques that actually work.

I am constantly having to rebut an extreme amount of ignorance and misinformation that is prevalent online about how comedy and humor actually works.

With that said, I will conclude this article with this:

If I were tasked with providing ANY sort of speech or presentation in the near future, I would ABSOLUTELY start it off with a street joke.

Why? Because I know what to do before an audience ever hears it. 😁