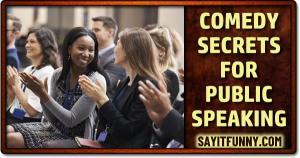 One of the key factors that nobody really talks about when it comes to generating laughs when giving speeches or presentations is anything regarding a person’s comedy talent – or the lack of it.

I think that the reason is that there is this notion when it comes to comedy talent that everyone has plenty of it, it just simply needs to be “unlocked”.

And just to be clear right up front – no, I don’t believe in the tooth fairy either.

So in this article, I want to focus on comedy talent and why it matters when delivering a funny speech.

So let’s talk a little bit about comedy talent – what it is, why most people have plenty (if they will just use it) and about those folks who don’t have the comedy talent God gave an ingrown toenail.

What Is Comedy Talent?

Before I can dive into any details on about comedy talent, I think it is important to define what it is.

Your comedy talent is actually the combination of two separate and distinct aspects of your sense of humor:

Sense of Humor Aspect #1 (The Mental Aspect): This is the “lens” through which you see the world around you. It is comprised of your perspectives and points of view on anything based on what you have experienced, know, thought about, etc. It’s how you “connect the dots” in your mind using information that you gather and use to generate laughs when you are talking with other people.

Sense of Humor Aspect #2 (The Expressive Aspect): This is the natural way by which you actually physically express the mental aspects of your sense of humor. This is a combination of the words you instinctively use, how you combine the words you choose to use along with the facial expressions, body language, voice inflection and tone variations that you use when you talk.

So your comedy talent is the ability to cause others to laugh when you speak and is a combination of both aspects of an individual’s sense of humor – the mental aspect and the physically expressive aspect.

It is this comedy talent that allows a person to easily add humor to speeches and presentations – that is if they don’t abandon it in the process I(more about this shortly).

Here are some important things to know about comedy talent…

The Myth About “Learning” To Have More Comedy Talent

A person cannot “learn” to have more comedy talent. While a person does “learn” both sense of humor aspects that make up their comedy talent, the process is so long (decades) and complex (the result of countless interactions with others) that…

It is literally impossible at this point in time for a person to somehow “learn” or to otherwise develop “more” comedy talent than they have right now.

Even in stand-up comedy, comedians don’t “learn” to have bigger or better comedy talent contrary to popular belief.

What happens is comedians learn how to focus and condense their comedy talent in a premeditated way, enabling them to deliver an average of 4-6+ punchlines for every performing minute. It’s actually the result of skillfully selecting, structuring and delivering content.

But there’s no “extra” comedy talent that has been learned or acquired. It’s really all about the application of a person’s existing comedy talent, providing they have enough to entertain audiences to begin with.

What I am telling you doesn’t just apply to the entertainment arts – it applies directly delivering a funny speech or adding humor to a lecture or presentation.

One of the things that chaps me raw when it comes to comedy talent is the peddling of materials that blatantly mislead people into believing that they can somehow  “learn” how to be funny and is marketed as some variation of this:

How To Be Funny, Even If You Aren’t

That’s no different than this ridiculous book title:

Study Your Way To Having Smaller Feet

People who have minimal comedy talent can learn to use open source comedy materials – jokes, quotes, quips, etc. – with some measure of success.

Even then, it can be a real trial and error process because these folks don’t have the sense of humor aspects needed to actually know what is funny or what level of funny the material is when it comes selecting the open source comedy materials to use in a speech or presentation.

Can You Know If You Have Enough Comedy Talent?

The fact of the matter is this – MOST people have more than enough comedy talent to do quite well in any type of public speaking adventure that they want to tackle and get laughs in the process.

But is there any way to tell for sure? Yes, but there are some roadblocks in the way depending on a persons level of self awareness.

Let me start with this:

A very poor indicator of whether or not if a person has ample comedy talent to generate big laughs frequently when they speak in public is if they were ever considered a “class clown” in school.

The best indicator of comedy talent has NOTHING to do with how frequently a person actually uses their comedy talent to generate laughs any time they talk.

It actually has to do with how genuine the laughter is when they do use engage their sense of humor.

When I say GENUINE laughter, I am NOT talking about:

These folks tend not to generate genuine laughter, but they are not self aware enough to realize it.

The reality is this:

Most people have a pretty good idea of what is genuine and what is phony when it comes to laughter.

And as long as someone is able to generate genuine laughter during their casual conversations with others, they have more than enough comedy talent to generate laughter when they deliver a speech or presentation because…

Just like in stand-up comedy, they are focusing and concentrating the comedy talent that they have to get more frequent genuine laughter when they deliver their speeches – NOT trying to develop a “better” or “different” sense of humor/comedy talent..

That is of course, if they know what they are doing when they use and apply their sense of humor to deliver a funny speech or presentation.

The very first article that I wrote for this blog was actually about comedy talent.

In a nutshell, here’s what it is focused on:

There is NO difference in the comedy talent that is used in a casual conversation or used when delivering a speech or presentation. If you don’t believe that, you have been effectively bamboozled.

The problem is that the second that a person buys into the nonsense that there are significant differences in the type of comedy talent used depending on the environment (casual conversations, giving speeches, lectures, or presentations, or delivering a stand-up routine)…

That’s when a person abandons their own already well developed comedy talent and starts trying to fabricate or otherwise “produce” funny using the nonsense methods peddled by the so-called comedy “experts” who don’t know the difference between comedy and camping.

Here’s the link to the article if you want to check it out:

sayitfunny.com
Adding Humor To Speeches Made Easier
This article contains the very first secret everyone involved in public speaking needs to know about adding humor to speeches and presentations.

I tend to focus a lot on comedy talent for several reasons:

First of all, it is the biggest and most important asset a person brings to the table when it comes to generating audience laughter – regardless of the environment they are using it in.

It also seems to be one of the most ignored aspects in “conventional” comedy education – whether it be for stand-up comedy or delivering funny speeches.

I think that’s because there this notion that there is no real need to address anything about comedy talent because what you need to do is simply use the “mechanical” methodologies that will “work” regardless of a person’s comedy talent. THAT IS FALSE.

One thing I know beyond a shadow of a doubt is this:

In any type of public speaking, there are no “participation prizes” for simply showing up if you stand before an audience and suck. You either win or you don’t.

Lastly, it has been my experience that once a person actually knows what their comedy talent is and just how powerful it can be, they no longer look to “reinvent the wheel” when it comes to using it for getting the audience laughs they want.

Delivering funny speeches is NOT as difficult as it may seem provided a person knows how use, structure and apply the comedy talent that they already have.