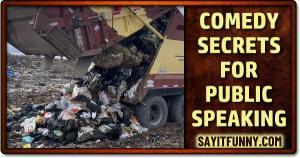 Using a great example video that I found on YouTube, I’m going to demonstrate why most of the information that you will find online (free or paid) regarding how to make speeches funny is complete garbage.

Specifically, I am referring to the whole “come up with a topic, then come up with a premise then pull a unexpected twist for it all right from your rear end” approach that has invaded the public speaking world like a bad rash.

And it’s not just that – I’m also referring to the whole joke formula nonsense (that is as effective as phrenology turned out to be) that has also proven to be quite pervasive as a means to attempt to make speeches funny as well.

So here’s what I am going to do:

With that said, let’s get started:

The video for which I obtained the transcript below is listed as 3 minutes 6 seconds in duration. The actual speaking time for the speech content in the video is 2 minutes and 55 seconds

Headline level professional comedians consistently generate an average of 18 seconds (or more) of laughter for each performing minute.

So this speaker was close to that in this particular funny video clip and would easily fall into the top percentile of speakers as far as laughter generation goes.

I should also mention that of the 6 or so video clips that I reviewed for this speaker, this clip displayed some of the least amount of audience laughter!

Below is the transcript from the pro speaker video clip that was taken directly from the YouTube video.

I did not omit or change any words in the transcript – all I did was format the transcript for readability by adding punctuation and quotation marks for direct quotes.

At the end of this transcript there are a series of questions that I want you to answer honestly BEFORE you review the video itself.

That is, if you really want to get the most benefit out of what I am trying to expose here…

I was seated on an airplane next to a man and they always ask the same questions. He said “what do you do for a living?” And I said “I’m a professional speaker.”

His eyes got this big. He turned around. He thought I said professional streaker.

He said “Where do you do this?” I said “Banquets, conventions. I’m going to do it on public television.”

A little while I got up, went to the back of the plane and when I came back he said “oh thank goodness, you’re dressed!”

He said “I thought when you went back there you were going to come running up the aisle of the plane.” And we got the whole thing straight.

I was seated on another airplane and I looked and a woman was coming on the plane dragging with her one of those two-year-old free ticket children. The little girl was this big she hadn’t seen two years old in a long time and did not understand why.

As they approached the gate, her mother scooped her up and wrapped her in a blanket and her little arms were going like this. And she was kicking and veins were standing out on her neck.

I looked out the plane window so that if maybe we didn’t make eye contact she wouldn’t claim a seat that had been assigned to her.

But in a minute she tapped me on the shoulder. “Oh oh certainly yes go ahead.”

They went by and the little child had on thick shoes and when they went by me knocked me in the head. And so when she sat down, I gave my pageant smile and I said “When they close the door to this plane, if there’s an empty seat anywhere, I will move and you can have mine for your little girl.”

And she thought I was a truly nice person. And they shut the door and I was gone. And the only seat I could find turned out to be next to a man whom I later found out to be 86 years old – 86!

I said “Well I I know you’d rather have an empty seat next to you but there’s a lady back there…” I explained the whole situation.

When I finished I said “Not only all that, I just don’t want somebody crawling all over me during the trip.”

1. You already know that in the video upon which this transcript was taken, there were 18 audible and countable audience laughs generated (which you can verify for yourself when you review the video).

So when you read the transcript above, did you break out laughing frequently like the audience did? If not, do you know why you didn’t?

2. Since much of focus in making a speech funny tends to concentrate on the “writing”, simple logic dictates that you should be able to print the transcript above, show it to people that you know and they should break out laughing when they read it.

Is that what you believe will happen if you did that after reading the transcript for yourself?

3. Much of the information offered in public speaking regarding how to make a speech funny also tends to involve recognition and application of joke formulas (exaggeration, word play, etc.) just like for stand-up comedy.

How many actual joke formula tactics can you identify from the transcript that generated the laughs in the video?

4. Even if you could identify ANY so-called joke formulas in the transcripts above, how EXACTLY would that help you to create funny speech content for you, your unique sense of humor and expressive style when you talk?

5. What EXACTLY are you supposed to do if the way you use and express your sense of humor to get laughs DOES NOT fall into any recognizable joke formula category that the so-called “experts” tell you to use?

Before you watch the video, I strongly recommend that you check out an article that I wrote where I review a so-called expert who specializes in public speaking humor and has a “trademarked” methodology for making speeches funny:

Once you have done that, now let’s take a close look at the video clip on the next page…