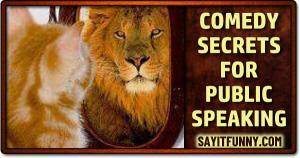 One of the most important attributes that a person can bring to the table in the realm of public speaking and adding humor to speeches is self-awareness.

It fascinates me that people can seriously lack self-awareness when it comes to some of the most obvious things (obvious to others of course).

Let me give you a prime example of what I am talking about from the world of stand-up comedy.

In every location around the world where there is comedy open mic that has been around for years, there are also prospective comedians who have been performing at those for YEARS and have yet to get any laughs or get minimal laughs.

But when they leave the stage, they are convinced that they “nailed it”.

Usually, the only thing they “nailed” was boring the audience to tears or irritating them to the point of needing medication.

The real issue at hand is usually not an absence of comedy talent – it’s a severe absence of self-awareness and a process to tackle the issues at hand.

I say that because if those folks had even a drop of self-awareness, they would realize that they are NOT doing well on stage and would be far more interested in taking action to correct the issue.

What I am talking about is not industry specific – it is something that can affect anyone in any environment like:

Well, since the focus here is on public speaking, specifically concentrating on aspects of adding humor to speeches, here’s an important point that I want to make:

My specialty is NOT in helping people become more self-aware.

My specialty is providing people – who are self-aware AND have comedy talent that an audience can appreciate – with the tools, techniques and strategies they need to get the audience laughs they want when they deliver a speech or presentation.

But unless a person has a measure of self-awareness, they simply won’t be able to adequately determine if they are truly entertaining audiences and getting the laughter levels they want when they speak to audiences.

Actually, they might not even be able to recognize that they aren’t getting any notable laughs at all when they deliver the humor content they deliver in a speech.

Let’s dig into this a bit further.

While the humor incorporated into a speech might be subjective in nature, the resulting audience laughter is NOT subjective at all.

Audience laughter is not only audible and visible, it is also measurable in a number of ways.

The easiest way to gauge laughter response is to simply count the number of audience laughs that were generated during a speech.

A much more accurate way to objectively measure audience laughter is to measure the cumulative duration of the laughter generated during a speech or presentation. That’s what my Comedy Evaluator Pro software is all about.

It is this objective and measurable nature of audience laughter that gives the definitive confirmation that the humor being used in a speech is effective and funny collectively to an audience.

My process and software for objectively measuring audience laughter response has been the BANE of the stand-up comedy world since I released it in 2003, even though it was featured in the documentary “I Am Comic” in 2010.

Why? Because it has the capability of taking a comfortable lack of self-awareness and smashing it to pieces.

Here’s the reality in the world of stand-up comedy, whether one want to accept it or not:

While there are plenty of comedians on the playing field, only a relative few can reach the laughter levels needed to make any noteworthy progress in the world of stand-up comedy.

Well, that’s just not acceptable. Why?

Because it immediately exposes the barely to mildly funny comedians for where they are truly at in the game.

This sort of objective determination has the potential to expose that which many comedians willfully ignore, which is:

They aren’t actually “killing it” and the reason they can’t move forward is not because they don’t have the “connections”.

But from a lack of self-awareness perspective, comedy is 100% subjective and whether the audience laughs frequently or not doesn’t matter – at least not to them.

Again, unless a person is self-aware enough to know not only when they are doing great but not really doing great at all…

It can be very difficult for a person to improve because they have already achieved “as good as it gets” and that should be enough.

My deal is this:

I want people to succeed at the highest level possible. But lack of self-awareness can be a major obstacle in that regard no matter how effective my strategies and techniques may be.

Public speaking has a much more flexible range when it comes to laughter generation than stand-up comedy.

In other words, a speaking professional doesn’t not have to generate an average of 18 or more seconds of audience laughter for every minute they are presenting to an audience like a headliner level comedian must do.

I cover those aspects in this article:

sayitfunny.com
Humorous Public Speaking Vs. Stand-up Comedy
There are some major advantages when it comes to humorous public speaking versus delivering a stand-up comedy routine. This article reveals those advantages.

But that doesn’t mean that a speaking professional can’t hit it out of the park when it comes to generating audience laughter.

Here are the objective stats for this clip with regard to laughter generation:

While this sort of speech is more an exception rather than the rule when it comes to speech laughter generation (because there is no “hard” training related information involved), please note:

Any speaker who can generate 30-45+ seconds of laughter for every 5 minutes of speaking time will usually be a hero to the audiences they speak to.

The point I want to drive home is this:

It takes a measure of self-awareness to recognize when humor added to a speech or presentation is NOT getting the laughter that you want or not generating the laughter levels you could get based on audience size.

Having the self-awareness one needs to be able to self-evaluate is a process, just like being able to ignore even that which blatantly obvious is a process.

Self-awareness is the ticket for pinpointing what really needs to be tightened up in your speech along with knowing just how well your efforts are going when it comes to  making your speeches funny.

I will also tell you this – there are things that you probably don’t know about venues and seating that can give the appearance of not doing so well in the laughter generation department when you were actually doing quite well.

I will be addressing these sorts of issues (learned the hard way I might add) as I move along in this public speaking education journey with this blog.

But for now, let me strongly advise this:

That can tell you everything you need know about how well the humor that you added your speech is actually working.