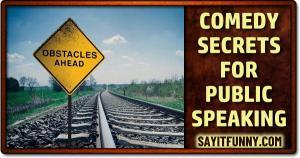 There is a very significant factor that can keep anyone who is involved in public speaking from using their sense of humor and natural comedy talent when they speak to audiences.

This factor is what I call specialization.

As a matter of fact…

Categorizing something in this way can not only interfere with the way the process is perceived but how it is used and applied.

Such is the case when it comes to using one’s naturally developed sense of humor and comedy talent for assembled audiences, whether it be in the realm of public speaking or stand-up comedy.

Let me give some perfect examples of what I am referring to and why it matters.

When it comes to using your sense of humor and natural comedy talent on stage in front of audiences – outside the casual conversations you have with friends, family, coworkers and colleagues – it is either expressed or implied that:

Both of those conditions are patently FALSE when it comes to using one’s sense of humor and natural comedy talent.

But it doesn’t matter whether this condition is merely an assumption that is made or it is something that is overtly taught to “fact”.

The problem is that this sort of “specialization” characterization automatically creates a situation where a person no longer trusts their sense of humor and natural comedy talent to get the laughter results they want when they stand before audiences.

Instead, they now feel the need to somehow learn or otherwise acquire the associated “special” sense of humor or comedy talent needed to get the laughs they want when they speak to audiences.

The reality is that this is all hooey. It might be high level hooey, supported by “experts” on any number of levels, but it is still hooey nonetheless.

Still, many very talented people unknowingly buy into this hooey lock, stock and barrel. They end up wasting their time and never reaching their goals because they are armed to the teeth with misinformation that insures that they won’t make the progress that they want when it comes to generating audience laughter.

Having the best sense of humor and the greatest comedy talent ever when talking with friends, family, coworkers and collogues suddenly becomes USELESS or insignificant  if you can’t use these attributes comfortably and effectively when you are standing in front of an audience.

So, let’s look at specialization a little closer, shall we?

The Decades That Specialization Immediately Discounts

Specialization as far as using one’s sense of humor and associated comedy talent is far more insidious than simply implying or overtly expressing that a different skill set is needed to get audience laughs.

Here’s some information you may want to take the time to research for yourself:

It takes the better part of TWO DECADES for a human to develop the sense of humor and natural comedy talent they have to express their sense of humor when they communicate with others.

More specifically – I am talking about hundreds of thousands, if not millions of interpersonal interactions with family, friends, neighbors, colleagues, acquaintances, teachers, strangers, etc. that started in very early childhood in order for a person to have the sense of humor, perspectives, points of view, references and the means by which they learn to express these aspects in order to get laughs when they talk to others.

But according to the so-called “experts” in order to get the laughs that you want when you deliver your speech or presentation you somehow need to:

That’s what specialization does in this instance – helps to brainwash people into believing they need something that is “different” than what they have already spent DECADES to develop and is ready to use right now.

What makes this situation worse is that talent cannot be taught, just like losing 150 pounds of excess body weight in a day can’t be taught.

There is no such thing as being able to “learn” to have a different or better sense of humor – you simply have what you have and it is ample enough to generate audience laughs or it is not.

Reality Is Easier Than The Fiction Being Peddled

I want you to reflect back on everyday conversations that you have had with others – at work, at home or at play – when laughter broke out during the conversation.

I’m going to go out on a limb and say none of those things happened. I’m also going to speculate that the conversations happened in fluid manner with people injecting their sense of humor and using their comedy talent when they could without much thinking in advance.

So here’s a question for you:

Why can’t it be that way when you develop and ultimately deliver your speech or presentation?

It’s because whether you realize it or not, you have bought into the concept of specialization for a process that doesn’t require that classification.

sayitfunny.com
Easily Adding Humor To Any Type Of Speech
This revealing article reveals the truth about adding humor to different types of speeches.

But wait a minute! There are some major differences between cracking up with friends and delivering a speech or presentation to an audience of strangers!

And at this point I would ask:

What EXACTLY is different when it comes to the “generating the laughter” part of this process?

Focus on the process for generating laughter – not the audience, the venue, not the speech content or topic of discussion, not that you are the one doing all the talking. Now I will ask again:

What EXACTLY is different when it comes to the “generating the laughter” part of this process?

The answer is the is NO difference.

Laughter as it results from TALKING in ANY environment involves something being discussed or presented and the use of a person’s sense of humor and comedy talent to deliver punchlines relative to what is being talked about.

Now just to be clear – YES, there are noteworthy differences when it comes to shooting the breeze with friends and giving a speech or presentation.

For example, people just don’t walk around with a podium and a microphone in order to talk with friends or family.

There’s a monologue presentation involved instead of a dialogue interaction when talking with people that you usually communicate with.

You personally know most of the people you communicate with daily and you talk with fewer of them at any one time than you would addressing an audience of mostly strangers who you have never met.

And while I would certainly classify those differences as significant, it doesn’t change the fact that for laughter to happen as a result of talking…

But because this exact same process happens in venues and environments outside everyday conversations – it now deserves the categorization of being special or different even though it is not.

But once someone has bought into the “specialization” brainwashing – it’s hard to shake.

Here are some questions to consider and some comments on what I have presented in this article:

The bottom line is this:

It is not my job to tell people how to think.

But it is my job to show people how they are being snookered when it comes to the misinformation being put out about using their sense of humor and natural comedy talent in activity of adding humor to speeches and presentations.

Public speaking is challenging enough WITHOUT the associated and unnecessary “specialization that gets attached, making it even more challenging.