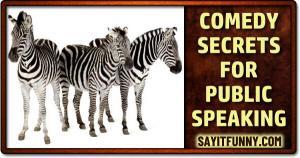 When it comes to adding humor to speeches and presentations, there’s one thing that I know beyond a shadow of a doubt which is this:

In order to make noteworthy progress to cause audiences to laugh on demand during a speech or presentation, you MUST use and apply accurate information to begin with.

Otherwise you will end up expending your valuable time and energy looking for the pot of gold at the end of the rainbow that never seems to materialize.

So the very first secret that you need to know about adding humor to speeches and presentations is this:

If you want to get big audience laughs during a speech or presentation, you will use the EXACT SAME mechanisms that you use when you are generating laughs when talking to friends, family or coworkers.

Unfortunately, many so-called “experts” on the subject of adding humor to speeches and presentations either directly or indirectly champion the the false notion that the sense of humor and comedy talent used around those we know is somehow different and/or inferior from that used for assembled audiences.

Using the “garbage in, garbage out” concept used in computer science which advocates that flawed input data will result in flawed output data…

The standard approach of ignoring or discounting an individual’s already developed comedy talent provides that initial “garbage in” foundation that helps to keep funny and talented individuals from getting the laughs they want in their public speaking endeavors.

Allow Me To Explain

Obviously, what I have just presented begs the question:

But wait a minute – aren’t there significant differences between speaking to an assembled audience and shooting the breeze with friends and family?

The answer is yes – but NOT when it comes to the mechanisms that cause laughter to happen.

For example, when engaged in a casual conversation with friends, family, coworkers or associates:

But when it comes to generating laughter from anyone in any environment, the primary mechanism involved is EXACTLY THE SAME, specifically:

1. There is some sort of initial information that is communicated and expanded upon.

In a casual conversation, this information (topic of discussion) can be expressed and expanded upon by anyone involved. This is called a dialogue.

In a speech or presentation, this information is usually provided exclusively the presenter and is referred to as a monologue.

Regardless, this information, content, or topic of discussion that I am referring to is exactly the same thing whether there is a dialogue or monologue involved.

In stand-up comedy this is referred to as the set-up. Then…

2. There is some sort of remark, question, or statement made with regard to any set-up information provided that generates a laugh.

In casual conversations, this happens spontaneously among those involved in the dialogue.

In a speech or presentation, this happens in a premeditated way during a monologue for an assembled audience.

In stand-up comedy (or any speaking for that matter) this remark, question, or statement made with regard to any set-up that causes laughter to happen is called a punchline.

Secret: A punchline doesn’t even have to be spoken words – it can be a body movement, hand gesture, facial expression or a combination of these.

You won’t hear that from most so-called “experts” on the topic of adding humor to speeches and presentations.

Now, let’s cut to the chase about why this is so important to understand if you want to generate big and frequent audience laughs…

You May Also Like:  Some Important Questions About How To Add Humor To Speeches

Why This Is So Important To Understand

Once an individual makes the decision to jump into public speaking (or stand-up comedy for that matter), a strange and unfortunate thing tends to happen when it comes to laughter generation which is…

They come to the conclusion that the public speaking arena that they have chosen to immerse themselves in is somehow “larger than life” and requires the development of a “better” or otherwise “enhanced” sense of humor or comedy talent in order to generate laughs from audiences filled with strangers.

Again, this flawed notion tends to be fueled by any number of so-called comedy “experts” who couldn’t find their rear end with both hands and flashlight when it comes to how comedy and humor really works on an individual basis.

Subsequently, the unsuspecting victim of this false notion either consciously or unconsciously ends up trying to be something that they are not, using tactics and techniques that are completely foreign to them and abandoning the sense of humor and comedy talent they use everyday and gets real laughs from real people — just like the real people who sit in an audience.

I know this from first hand experience because I was that unsuspecting victim when I first started my stand-up career in the early 90’s.

It wasn’t until I realized that the sense of humor and comedy talent that I effectively used off stage was more than “good enough” for use on stage and from behind a podium that my stand-up comedy and speaking engagements literally took off.

You can’t “learn” to have a better sense of humor or more comedy talent than you have right now.

What you CAN do is this:

1. Accept that your sense of humor and comedy talent is more than good enough for any audience you stand in front of and…

2. Learn to understand and effectively use the sense of humor and comedy talent that you have in the most natural way possible for the audiences you will speak to.

Not only is much of that information either DEAD WRONG or not really actionable but it can also be hugely counter productive when it comes to actually using your sense of humor and natural comedy talent effectively as a presenter or public speaking professional.

Let me leave you with this:

Adding humor to speeches and presentations can be a relatively easy process provided you that are armed with the right information that allows you to tap directly into your already developed comedy talent. 😀